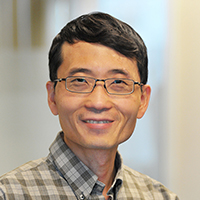 Mechanism of PU.1 and its Effect on UCP1 Expression

The main focus of our research is to study the molecular mechanism of caloric restriction, which extends animal life span and reduces the onset of obesity, diabetes, cancer, neurodegeneration and cardiovascular diseases. The study of the molecular mechanism of caloric restriction may lead to pharmaceutical treatments that may mimic caloric restriction’s beneficial effects. Sir2 gene, which encodes a NAD+-dependent protein deacetylase, was reported to mediate the effect of caloric restriction in yeast. We have demonstrated that the expressions of two of the seven mammalian Sir2 homologues, SIRT2 and SIRT3, are up-regulated in response to dietary restriction, cold exposure and oxidative stress. We have illustrated the molecular mechanism of SIRT2’s action in oxidative stress resistance and the inhibition of adipocyte formation. We have also shown how SIRT3 activates adaptive thermogenesis program in brown adipose tissue and how SIRT3 regulates glucose disposal and fat oxidation in skeletal muscle. To understand the underlying molecular mechanisms, we have identified several substrate proteins for SIRT2 and SIRT3. Research is under way to investigate the actions of sirtuins in gain or loss-of-function animal models. Another research direction we take is to study the development of adipose tissue and its changes during obesity. By investigating how mature adipocytes are derived from multi-potent precursor cells, we can gain insight into obesity prevention. In addition, by studying how factors produced by adipocytes and adipose tissue influence whole body metabolism, we may learn how obesity causes insulin resistance and subsequent type-2 diabetes. We have revealed that the expression of the PU.1 transcription factor is increased by obesity in visceral but not subcutaneous adipose tissues. We further found that in adipocytes, PU.1 up-regulates the generation of free radicals and pro-inflammatory cytokines to suppress insulin signaling. We are currently exploring the possibility to ameliorate obesity-associated metabolic dysfunction by targeting the PU.1 pathway.